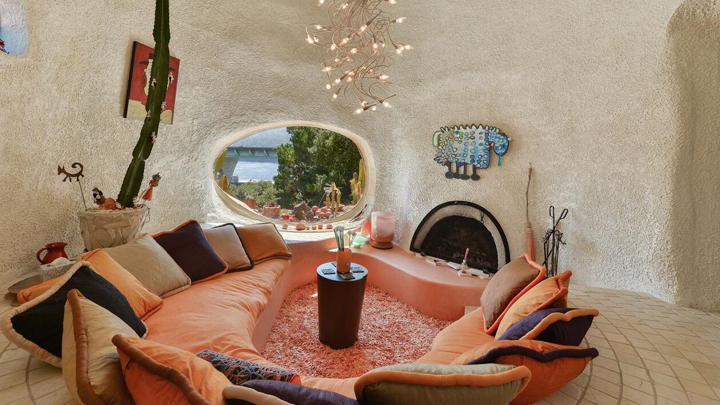 Remember the stone house they lived Pedro and Vilma? Small, many of us dreamed of living in a house like this, with dinosaur included as a pet.

Well, the dream has come true, because this house there is, how could it be otherwise, California, United States. But do not imagine the prehistoric home of Peter and Vilma, because this House Flintstones lacks neither the smallest detail. You traveled to the Stone Age, joining us?

In the San Francisco Bay

Located in the village of Hillsborough, in the San Francisco Bay Area, we found a small home that leaves no one indifferent. Known as House Flintstones, for its resemblance to the home of the famous television series extraordinary, this house is looking owner.

And it seems that it is difficult to find a buyer, since housing has fallen in price on several occasions. And it has gone from 3.78 million to 3.2. Most surprising of all is that the official price when first came to market in September 2015 was 4.2 million. Even with such a reduction, the house is still without an owner.

Located on a hill overlooking Interstate 280, one of the main routes in California, the house arouses the interest of the youngest. Not so much their parents.

Despite its appearance, with a somewhat amorphous design, the interior of the house is very well equipped. The house has three bedrooms and two bathrooms with a most eclectic decor that tests our imagination.

You may also like to read another article on HealthyHousePlans: Sunny penthouse in Honolulu

A total of 250 square meters, decorated with a somewhat surprising style, with exotic dyes, large doses of color and character pieces. One of the most extravagant decoration, not suitable for all audiences.

Now, what it is the origin of this House Flintstones? In fact, it has nothing to do with the famous television series. The truth is that the housing and has a few years history.

Designed by architect William Nicholson and built in 1976. The goal? Experimenting with new materials of construction and with different building techniques. Thus, the team led by Nicholson got down to work in the construction of this unique and picturesque stone house.

To create these distinct forms of bubbles, William Nicholson sprayed concrete over wire mesh frames and giant inflated balloons. This and other techniques to House Flintstones became a very famous house of San Francisco, which leaves no one indifferent, especially children.

Remodeled and looking for owner

Actually, the house has not always been empty since it was inhabited until the 80s . It was then when he left and was forgotten until he suffered a remodeling way back in the 2000s.

However, despite its facelift, the stone house not like any buyer. A house surrounded by trees and lush vegetation, whose green contrast with bold orange of its original facade. So, with similar characteristics, it is not surprising that the Flintstones House has hoarded magazine pages and interior decoration of half the world.

A house that amazes children thanks to a design truly daring, innovative and daring. Or, as would Fred Flintstone: Yabadabadú!

What about the house? Be honest, would you live in?