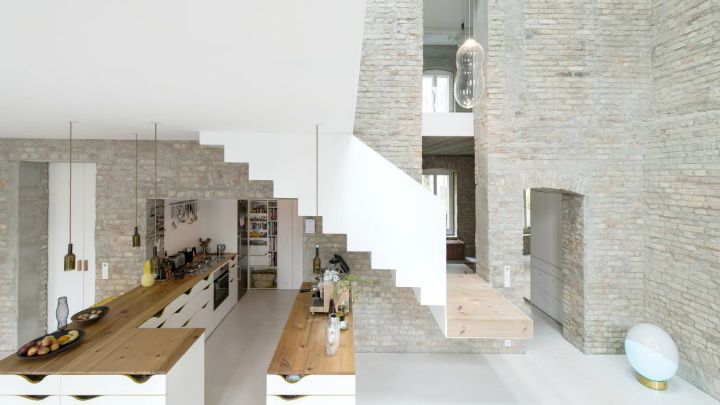 Today we enter a wonderful building that in 1844 hosted the house of a miller. It is located in the Prenzlauer Berg district of Berlin and its transformation into the home that we will know then it was a challenge for the study, manager giving a new life to these walls to make them a spectacular detached house with garden. If you want to see how was the process and what has been the result we encourage you to continue reading and discover all the secrets of this restoration.

This building was the oldest of this Berlin district and, therefore, the authorities asked the architectural firm that rebuilt the facade of this building protected by the heritage as represented in a historic drawing dated 1844. They wanted to show history the old building without the facade gave signs that had more than 170 years.

It is having been the miller’s house this building was used as a police station and as a workshop; they came after many years of disuse, so that the house was in disrepair and had many rooms, but too small. In order to create a large space only they kept the outer walls and a huge central wall.

The staircase, the kitchen and some of the spaces for the bedrooms are, somehow, as “plugged” in this wall. In the first part the bedroom is separated from other rooms with a large sliding door. The stairway is divided into two parts; the first five steps lead up to a small podium and then can proceed to the second floor.

You may also like to read another article on HealthyHousePlans: Light and color in this house in Nashville

The planning process was conducted in close and constant communication with the client, a family with two children, which led to the introduction of a large number of very personal elements and specially designed for this home. This is the case of the sinks and the bathtub, for example, tailor – made for this project.

In the renovation of the old miller’s house in Berlin some old elements have been lost but others have remained to give the house that historic character and that special charm. For example, on the stairs and in the kitchen has been re-used the wood of the old beams of 170 years ago. In addition, the old brick walls have been left in sight, which gives it a unique personality to this house. The ceiling was renewed following its original form.

The architectural design of the facade

The idea of the team of architects was interpreting the lines of the old drawing of the building through the differences in height of the facade of stucco using ancient techniques and materials to keep the traditional character that had this building with so much history behind them. They had to have several physical models and perform much visualization until they finally came up with the solution that appealed to the relevant authorities.