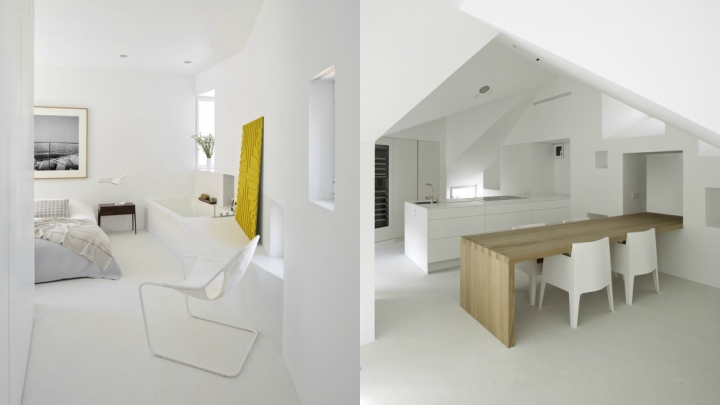 In our section of Houses that fall in love we travel far, to different countries and cities in which we enter in homes that fall in love for one or several reasons. Today we go to Spain, specifically in the center of Madrid, where we find this reform that carried out the study of architecture Ábaton in collaboration with the Swiss Wespi de Meuron Romeo Architects.

It is a comprehensive reform that has given an incredible result. The original dwelling is located in a building of the year 1900 and had not been restored or improved since the 1940s. It was joined by an old space that had been destined to storage area and roof, thus creating two floors in which Modernity and tradition coexist in harmony. We went into it to learn more about this project.

The ground floor of this new duplex is located on the sixth floor of this old building in Madrid. In it was a classic apartment with historical elements that had a high aesthetic value: plaster on the ceiling, some spectacular windows … The remodeling has tried to keep all this whenever it has been able, designing a new space that never loses sight of its origins. The original divisions of the different rooms were maintained but new functionalities were introduced.

In the upper floor, the seventh of the block, there was an attic that was not used and had no style or shape. Here it was decided to build the main living room, from where you access the roof terrace. It is a minimalist and modern plant, there are no traditional touches here.

It has a gable deck and small openings that bring light to its interior. Some of its walls were designed large embrasures that allow this natural illumination to reach all corners. It is a space attached to the kitchen, which is in the center, where the ceiling is higher than the rest.

You may also like to read: A house built on the sand and waves of Malibu Beach

The connection between the two floors

The most minimalist modern style we also see at the entrance, the hallway and the master bedroom. All this provided with good natural lighting in a modern environment with traditional touches that give that special air to the house.

If the interior of this house is liking you will see when you reach the terrace located on the roof of the seventh floor. Incredible outdoor space from where you can enjoy beautiful views of Madrid.

The decoration: The white as the protagonist

The white is the color chosen to give continuity to the decor, and is present in doors, floors, ceilings and walls, achieving a visually large bright and welcoming space. As for the decorative elements, the design of interior design by Batavia shows us small notes of color through the introduction of plants, textiles as carpets of paintings for the living room and cushions in the same tone as the sofa, and Touches more vivid as the yellow of the bedroom picture. Wood and natural fibers are the main materials.